In just two years their development work achieved a level high enough for Swift Racing Dragon Boats to be the choice of the Organising Committees of the 2009 EDBF Club Crew Championships, the 2009 IDBF World Nations Championships and the 2010 ICF World Championships.

This effort was rewarded in the finals of the 20 man men’s senior 200m event at the 2009 IDBF World Nations Championships, when the team from the Philippines set the current World Record of 40.02 seconds, smashing the previous record set by over 2 seconds.

Today Swift Racing crafts both 20 man and 10 man Dragon Boats, suitable for IDBF and ICF, as well as the 20 man and 10 man boats for the CDBA, and all of these can be supplied in the UK and Ireland by Rowing Centre UK. 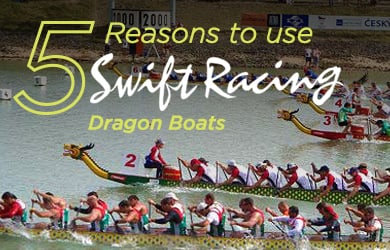 5 Reasons to use a Swift Racing Dragon Boat: